A Merganser’s Master Guide to Homeschooling 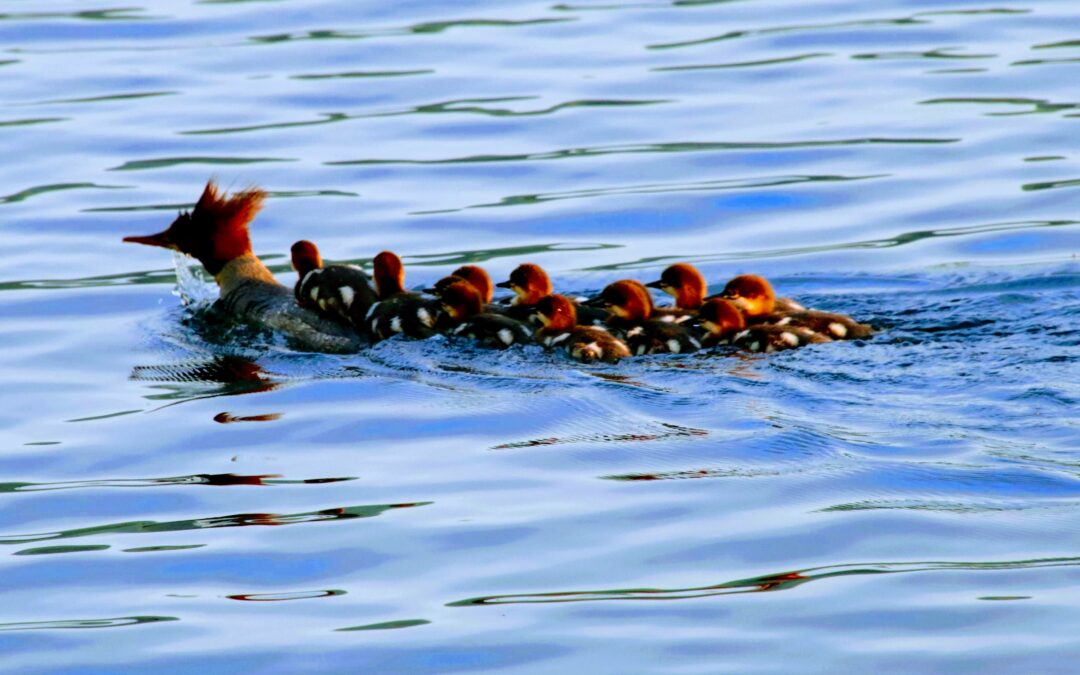 Whoosh! A loud fluttering sounded over the chorus of chirping birds that had already awakened me. Turning quickly to my right, I looked out the large picture window and caught a glimpse of what appeared to be a duck in flight headed straight for the towering old oak rising 20 feet from our house. The duck de-accelerated and appeared about to land on a branch of the tree about 30 feet from the ground. But there was no landing. The duck suddenly hung a sharp u-turn and flew back across the window and over the lake in the same direction from which it had come.

Amazed, I hurriedly woke my wife Melissa and began trying to describe what I’d just seen—but broke off when we both saw another duck hurtle across the window towards the same oak, only to break its momentum and make the same u-turn. Melissa became equally excited by the cartoonish quality of the large bird’s last minute about face.

I believed I could identify the birds in flight as mergansers, which are perennial residents of the lake. Melissa and I watched, wide-eyed, as one duck after another—or perhaps the same one time after time—flew the same path. Only after eight or so rounds of this could we tear ourselves away to rouse our son Harris and bring him to the window.  By then, unfortunately, the show had ended. We had just witnessed what appeared to be the Advanced Flight lesson in the Mergansers Home Schooling Program.

With schools shuttered across the country due to the COVID-19 pandemic, parents have struggled to figure out how to home school their kids for the first time. The mergansers I’ve been watching from our screened porch on the shore of Maine’s Thompson Lake for four decades have home-schooling down to a science. The step-by-step education program they give their young seems to be embedded in their DNA. 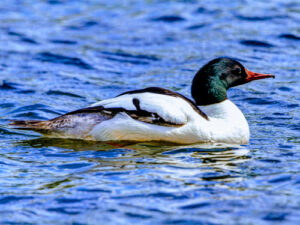 The Common Merganser is a large duck. As with many bird species, males and females are easily distinguished and the males are more colorful. Although the males of many species can rightly claim to be more attractive than their mates, not so for mergansers. As usual, the male is more colorful, with a red bill and dark green head above a long black-and-white body. 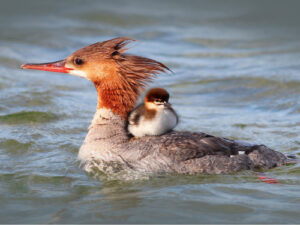 A female Merganser and chick

But there’s another reason I’m partial to the female mergansers: they show up. In all the years I’ve been admiring these ducks, I don’t remember ever seeing a male. Little wonder: As the Cornell Lab of Ornithology’s All About Birds tool explains, after mergansers court in winter flocks, a female builds her nest in a hollow–often a hole in a tree–as far as a mile from the water and as much as eighty to a hundred feet above the ground. The males disappear from the picture before the chicks hatch–gathering in flocks with other males, spending their time hanging out, fishing, and doing whatever else truant duck dads do. The job of raising the kids is left entirely to mom, whose work begins almost immediately and proceeds methodically, one lesson at a time.

Newly-hatched chicks remain in the nest for only a day or two before their mom carries them to the water. The first few days on the lake are somewhat cushy, as the fuzz-ball chicks ride on their mom’s back, looking down at the water on which they will spend much of their lives. When the chicks grow too big for all of them to fit on mom’s back–or there are just too many of them for that scarce real estate–they take turns hitching a ride: four or five on mom’s back, with another one or more swimming behind for a bit before jumping on and knocking one of their brothers or sisters off. This game of water billiards continues until mom has them all in the water, as Swimming 101 progresses quickly. 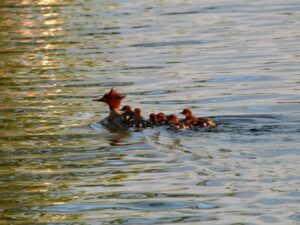 Baby Mergansers on Mom’s back

It’s not surprising to see the chicks grow in size. But I was baffled in late June when one brood suddenly appeared to grow in number, as a mother I thought had ushered five chicks past our house for several days swam by with ten in tow. I couldn’t decide if I was looking at a different mother and brood, or if the mother I’d been watching had been leaving part of the family back in the nest until then.

An article in the Audubon News supplied some clues. Female ducks of various species often lay eggs in more than one nest–sometimes using  the nests of other birds, including nests of other species. Probably just one of nature’s ingenious strategies to insure against the risk that a mother’s only nest and chicks would be gobbled by predators. Apparently, therefore, a mother merganser can raise several broods at once; will raise the chicks of another mother who’s been killed; and sometimes cannot tell her own chicks from those hatched from the egg of another mom.

Whatever their number, chicks continue to learn as they grow, and all of them begin to resemble miniatures of their mom—-including the immature males. They swim in a long, narrow wedge formation with mom at the point and the chicks swimming in place behind.

Last Tuesday afternoon brought another surprise.There was no wind and the lake looked like a sheet of glass. As I sat doing some work on the porch, there was a loud rush of water close to shore. Looking up for the boat wake I assumed had caused it, I instead found a bunch of merganser kids scooting–running–on top of the water; doing group wind sprints for twenty-five feet or so and then swimming normally for about ten seconds before sprinting en masse again. I’d seen this exercise in past years but was baffled to see no mother chaperoning the chicks as they romped alone on the lake–easy pickings for a loon from below or an eagle from above. I worried that the mother had been killed by a predator and that the chicks would not be long for this world.

Once again, Audubon offered a possibility but no definitive answer: Merganser chicks are indeed vulnerable to various predators as they parade up and down the lake not yet able to fly. The sprinting motion I saw is a time-proven tactic for dodging such attacks. And I suspect that their mom was watching this drill from somewhere along the shore, perhaps grading her students. 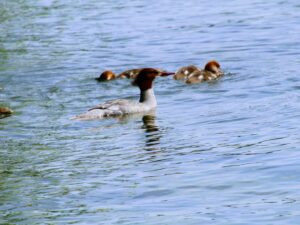 The kids grow rapidly and, as they do, mom loosens the reins somewhat. She gives the kids more freedom to roam as they cruise the coast of the lake–sometimes relinquishing her spot at the head of the class, content to keep them all in her sights.  On a recent afternoon the kids practiced their fishing technique with face plant dives that left only their butts bobbing above the water as mom kept an eye out for danger.

A few nights ago there were eleven noticeably larger kids in the pack. They were now all close enough to their mother in size and appearance that it took me a minute to find her in the pack. Adding to my confusion, the next morning a mother travelled the very same route as every other day but now with twelve fuzzy  newborn chicks–obviously not the same as the eleven of the day before. So I wondered, how many broods with chicks of different ages  did this mom have–or how many moms and broods had we been watching traveling the same route? (I’ve since learned that a female can have only one brood at a time so we’d apparently been seeing multiple moms.) 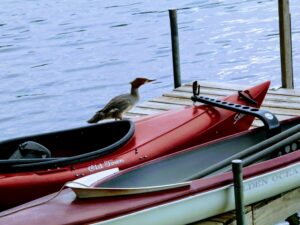 Mom Merganser hanging out on the dock

On the morning of the advanced flight drill I’d gotten out of bed to go the bathroom at around 5:45 am. From the second-floor bathroom window, I saw a female merganser hanging out on our dock. I ran downstairs and snapped a picture of her before going back upstairs to bed. It was about half hour later when the aerial games began. In its aftermath, I had new questions:

Had the merganser on the dock been scouting the site for the drill that was about to occur? Was she a member of the flying squadron we’d watched? Was there even a squadron, or just one duck–perhaps her–flying back and forth? And if it was a group exercise, who were the other birds we’d seen bombing towards the oak? Were they some of the same chicks I’d seen ride on their mom’s back just weeks before? That seemed implausible. The Animal Diversity website shed some light: Although mergansers can fly within as little as sixty days of birth, the mothers abandon them before then! So perhaps what we saw was a gang of older teenagers, who often band together after being abandoned by their parents, flying the last leg of their home-school program on their own.

Except for the extraordinary flying demonstration, we’ve watched mergansers home-school their young the same way each year for decades. Given all the parenting books we read, and how long it takes a human infant learn to do anything for itself, it’s remarkable how single mother mergansers–with no instructional manual other than instinct and their own experience as chicks–can teach their kids to survive in a matter of weeks. And, how quickly the kids learn to fend for themselves (according to Cornell’s All About Birds, they start catching insects almost immediately upon hitting the water and small fish within two weeks).

Mergansers are not unique in this respect. Certainly not an original thought, but perhaps most amazing and therefore worth remembering, is how nature has endowed so many other species with their own extraordinary abilities to quickly teach their kids to stay safe and nourished in their perilous worlds.