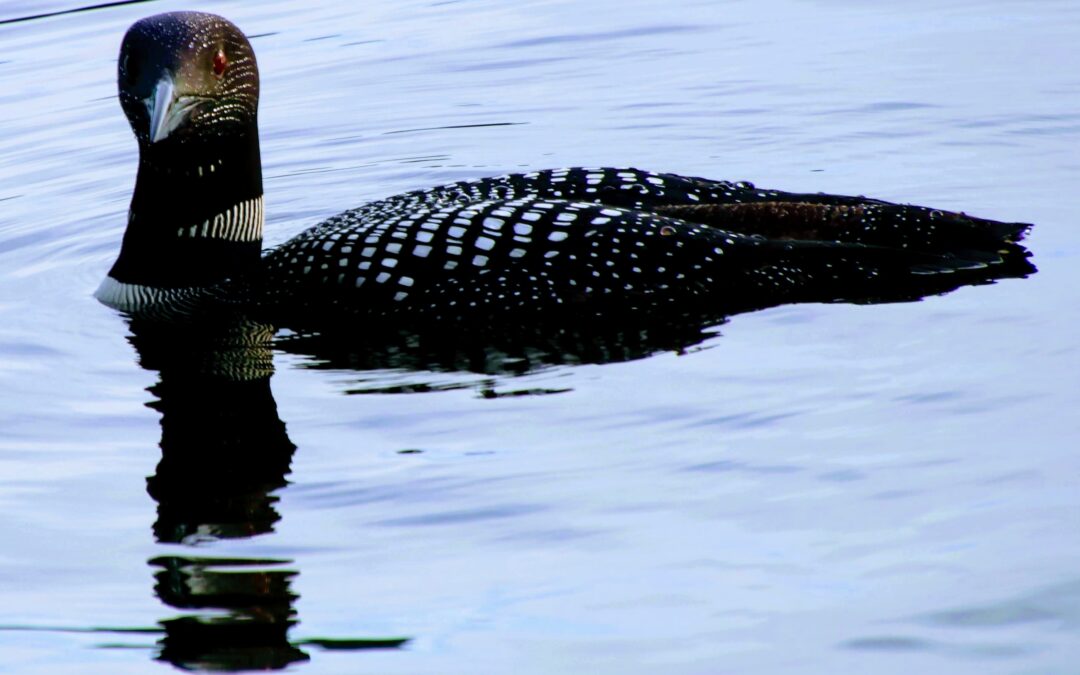 I’ll never forget the first time I saw a loon. She made a fool of me. It was August of 1978, on the first day of  a 100 mile canoe trip with my college roommate on the iconic Allagash River in northern Maine–the same trip Thoreau memorialized in his Maine Woods almost 150 years ago and that John McPhee chronicled in Diary of a Birch Bark Canoe. I can date our trip because it was the summer of the NY Yankees’ comeback from 14 games behind the Red Sox, capped by Bucky Dent’s famous, or infamous, home run–depending on which team you rooted for. The Yanks were 13 games back when we began the trip. They were within six when we emerged from the river a week later, having had no contact with civilization in the interim, decades before the advent of cell phones.

After putting into the river at Telos Landing and battling the (unbeknownst to us) legendary winds on Chamberlain lake for every minute of the several hours it took us to cross it, we paddled through a few far more peaceful lakes. On Churchill Lake, sitting on the water no more than 40 feet from us was a large duck with a black head and a black and white back. We steered closer to the bird so I could get a picture on my Kodak instamatic camera. But as we approached, the duck suddenly dove under the water. I sat there waiting with my camera poised, planning to snap the picture as soon as the duck surfaced. It didn’t. Instead, about a minute later, she rose about 75 yards away from us. We paddled over to the new location–only to be toyed with again; and again. After the duck had messed with us for a third time, we gave up and paddled towards the Chase rapids, where we quickly capsized.

Shortly after we and our battered rented aluminum canoe had survived the trip, I related the perplexing story of the trickster duck to a friend. 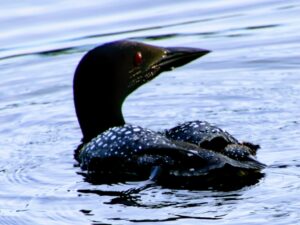 He told me the bird that had made me look silly was a loon. Forty-two years on, having watched and been serenaded by loons on Maine’s Thompson Lake for decades, I’m well acquainted with the ways of these amazing birds.

Common loons, the species found in Maine, weigh between 5-16 pounds. My experience on the Allagash was par for the course: they can stay underwater for up to 5 minutes and dive to depths of 200 feet to find fish to eat. I know now that when a loon floating on the lake a hundred yards away coasts in our direction and then dives, there’s a good chance it will pop up in front of our dock. So I grab the camera and get ready. Which is how I snapped these close-up pictures–capturing this loon’s ruby red eyes and black-and-white checkered back, which has always reminded me of Yasir Arafat’s headdress. 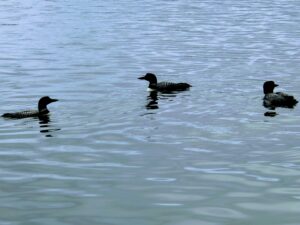 A family of loons.

A few other loon facts. Common lore has it that loons mate for life, and it’s not uncommon for us to see mom, dad and a chick hanging out, which likely explains this this photo (According to Maine Audubon, however, loons are actually not quite so faithful and usually separate after 7 years).  Loons can fly at speeds approaching 90 mph.  But due to the small size of their wings– small only relative to their unusually heavy body weight–they have trouble taking off. In order to do so, they have to flap their wings furiously and get a long running start–kind of like a clunky old sea plane. Below, there is a great shot (taken by Melissa) of a loon spreading its wings.

Finally, aside from their extraordinary underwater skills, loons are most known for their four different calls, referred to by Loon Preservation Committee as the Tremolo ( the “crazy laugh”), the Yodel, the Wail, and the Hoot. I couldn’t count the number of nights a loud loon chorus has kept me awake–or woke me up in the middle of the night. Unlike an infuriating car alarm or horn in the city, however, there’s no time of day or night when I don’t appreciate the loon calls, especially when it sounds like there’s a raucous party going on with their calls echoing around the lake. Nature’s wonders never get old. 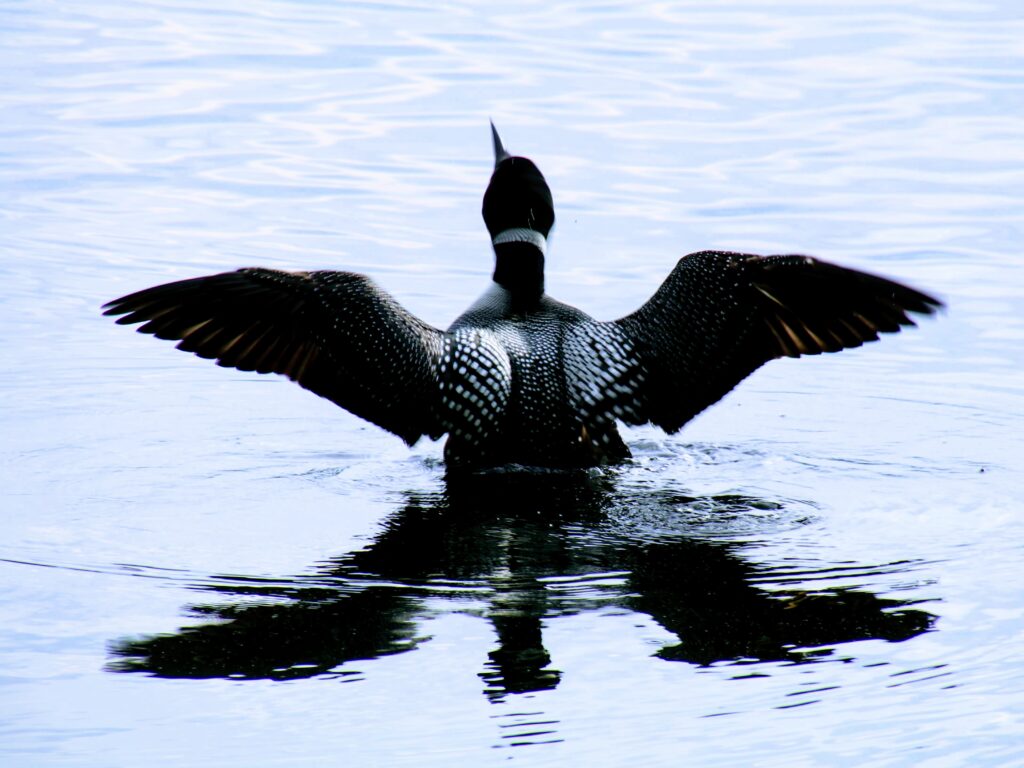 A loon spreading its wings.