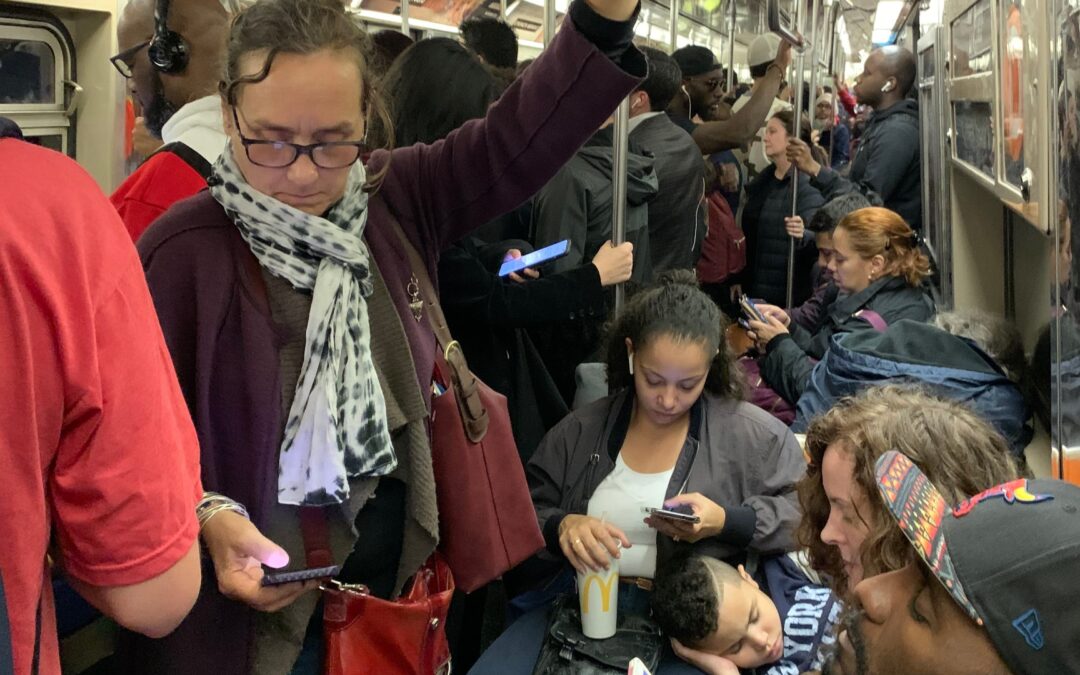 A lot of people these days bitch about our New York City subways–with reason. The MTA’s finger-in the-dike campaign to repair our antique system continually scrambles the system and peoples’ lives: They’re late for work; they can’t get home when they’re weary after work; they’re late for doctors’ appointments, classes, or theater dates. Things are especially bad on the weekends when routes are cancelled or shuffled, purportedly due to system repairs. I confess that I’ve found myself among the moaners on occasion. But I always quickly stop myself.  Because, truth be told, I love and marvel at our subway system.

My family and I live within steps of the West 81st Street Museum of Natural History stop for the B and C lines–on which, ordinarily, one can easily get to Yankee stadium in the Bronx, or to Madison Square Garden (to witness the pathetic New York Knicks), or Greenwich Village, Tribeca, or Brooklyn–and that’s without even switching, without paying, to other subway lines. I’ll admit that while some of the things that infuriate many people usually don’t disturb me, life underground can be challenging these days. Just one example: Rushing to the station on a recent weekend to meet friends downtown in Greenwich Village, my wife Melissa and I were met (after paying our fares) with a sign announcing that the downtown C train would not be stopping at 81st Street–and instructing that to get to our downtown destination in the Village we would need to take the uptown C–to 125th street–and then take a downtown A train. And then there are the ordinary weekday mishaps: your train breaks down, or is stalled because of an incident involving some other train further up the line–and you can’t decipher why you’re not moving because the announcement explaining the dilemma is as garbled and annoying as it is loud. So why, despite all of this, do I love our dilapidated 115-year old subway system?

Because, while it can be messy, it gets me to and from just about anywhere in the City in a fraction of the time that a taxi or Uber would take: a Mets baseball game in Queens, dim sum in Chinatown, meetings in Brooklyn, doctors’ appointments all over the city.

Because, wherever and whenever I get in a New York City subway car I can look around and see an eye-popping panoply of people from all over the globe speaking myriad languages: Chinese, Russian, Italian and German, to name just a few, in addition to the Black, White, Hispanic, Muslim, Asian and Orthodox Jewish people of all ages who live in the City and visit from all over this country. At just about any time of day, and no matter how you define it, there’s more “diversity” in any single subway car then in all but a few cities in the world.

Because, having turned 65 I can now travel anywhere in the City for $1.37 on my Senior Citizen’s discount card–one of the very few consolation prizes awarded for getting old.

Because I love the music in the subways, or at least a lot of it–The sometimes talented classical violinists, the jazz musicians who play at the Times Square station; the trio of elderly black men who walk thru the cars singing My Girl and other vintage Temptations songs in beautiful harmony, collecting contributions in a hat along the way.

Because, very simply, the subway is a cauldron in which all the space and many of the isolating barriers that otherwise divide people from different walks of life–and disturbingly unequal economic classes–are temporarily boiled away, leaving the concentrated essence of the City bottled up in each car; all huddled together, sitting squished side by side, or standing scrunched body-to-body, holding onto the same pole–black, white, and yellow hands stacked closely on top of each other.

I recently decided to keep a diary of noteworthy experiences on the subway, which I’ll post on this blog from time to time. Here’s the first one I recorded, coming home on the subway from Penn Station the day after spending Thanksgiving at my sister-in-law’s in Rhode Island:

Stay tuned: More to come in future posts. In the meantime, please send comments with about what you love and/or hate about the New York City subways (or those in any other city you live in or have visited); about your experiences—good, bad, funny, or infuriating—on them.