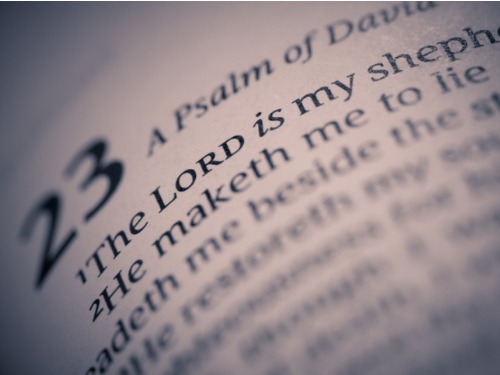 I have long kept a secret that most who know me would find surprising. Surprising, because it touches on religion, which has never been a big part of my life. Growing up in the Beacon Hill garden apartments, a largely Jewish enclave in Dobbs Ferry, New York, my only connections to the local synagogue entailed playing on the Greenburgh Hebrew Center basketball team and fidgeting through my friends’ seemingly interminable bar mitzvah services. I never went to Hebrew school and was never bar mitzvah’d. Instead of a religious affair, to commemorate my becoming a Jewish man when I hit 13, my parents took a bunch of my friends to Manhattan to see a scary off-broadway play that terrorized all of us, followed by a dinner at Dawsons, an old English pub. My disassociation from organized religion continued in this vein well into adulthood. And so, I had little doubt that those who knew me well, including my wife of 31 years, would be surprised to learn that I had fallen in love with the 23d Psalm.

The iconic verses of the Psalm have been recited at every funeral I’ve attended for as long as I can remember:

The Lord is my shepherd
I shall not want
He maketh me to lie down in green pastures
He leadeth me beside the still waters
He restoreth my soul
….
Yea, tho I walk thru the valley of the shadow of death I shall fear no evil for thou art with me.
….
My cup runneth over
….

I always found listening to–and reciting–the Psalm during funerals to be a soothing experience and looked forward to it, especially for solace in the midst of services for the most tragic deaths: a friend’s teenage son who’d committed suicide, several close friends and law partners cut down by cancer long before their time–leaving heartbroken wives and children behind. But at some point in the last twenty years, the 23d Psalm morphed from the somber ritual chanted in unison at every funeral into a warm poetic companion of my daily life.

Trying to date the origins of my fascination with the 23d Psalm, I know it was in bloom before the Spring of 2002, when I took my first fly-fishing trip, equipped with a rod Melissa had recently given me for my fiftieth birthday. I was sitting behind the lodge in Twin Bridges, Montana, looking down a grassy slope at the narrow, winding Ruby River, when I decided to ask my friend Henry a question that had been baffling me for some time. Henry, a soft spoken native of Louisiana, had gone on from LSU to become one of the most senior officers of American Airlines, a company I’d represented in litigations for around fifteen years. But more importantly, he was a good Methodist and the only friend I thought might be able to answer my question. So, on a break from practicing my casting on the grass, I gave it a try:

“Henry, do you have any idea why the 23d Psalm refers to the Lord in the third person throughout the first half of the Psalm and and then switches to the second person?”

It was clear from his quizzical expression that Henry found my question a little strange, but he replied politely: “what do you mean?”

So, I explained: “Well, in the first half, it refers to God as “He”—”He maketh me to lie down in green pastures”; He restoreth my soul;” “He leadeth me in the paths of righteousness”– and then it suddenly switches and refers to God as “Thou” [or “You” in some modern versions]:  “I shall fear no evil for Thou art with me;” “Thy rod and Thy staff they comfort me;” “Thou anointest my head with oil.“

Henry pondered the verses and my question for a minute, and then  replied: “Gee, Rich, I don’t have a clue.”

Although Henry’s inability to clear up my little mystery was disappointing, I set it aside, temporarily, and the fishing was better than we, at least I, deserved. The plentiful Montana rivers and some talented guides were enough to compensate for the fact that I was a complete novice in those days–not the experienced, if still mediocre fly-fisherman I’ve since become.

After Montana, my curiosity about the change in how the Psalm refers to God–and about the meaning of a number of its verses—lingered, and led me to embark on some admittedly cursory Google research, which also provided little help. The most striking thing I learned was that the traditional view, challenged by some, is that the Psalm was actually written over three thousand years ago by King David–who was himself a shepherd long before ascending to the throne.  There are inconsistent published interpretations of every verse, many of which I’ve found unconvincing, particularly those positing that the speaker in the Psalm was a sheep, or a flock of them. I’ve never found a satisfying answer to the question I asked Henry.

At some point, the 23d Psalm morphed from a subject of intellectual curiosity into a meaningful part of my life. That certainly was evident (although I’ve since realized secret) by the time of my cervical spinal operation in 2009. I remember that after the surgeon walked me down the hall from the hospital changing room into the surgical “theatre,” I lay face-up on the operating table in the anxious minutes before being put to sleep. I was decked out in a typically hideous hospital robe, with the back open, and an even uglier tissue paper shower cap covering my bald head. It was cold in the brightly-lit, white room, and there was activity all around me, as nurses, anesthesiologists, and medical residents prepared to assist Dr. Snow in the operation. With nothing to do but lie on my back and fret, I closed my eyes and silently murmured David’s soothing verses, which relaxed me until the anesthesia took over. I performed that same ritual to ease myself into the additional surgeries and bone marrow transplant that followed over the next decade.

But even more surprisingly, the Psalm seeped much deeper into my consciousness sometime after that first operation, and became an almost automatic part of my nightly bedtime routine. Although I knew virtually nothing about meditation in those days, I realize now that for years I was using the Psalm as an unorthodox way of meditating–diverting my mind from the preoccupations of the day gone by and the one to follow, and carrying me off to sleep. Coordinating each line with my breathing, I would try to visualize the rich scenes painted by David’s verses–often dwelling on and repeating selected lines in order to better picture, absorb, and appreciate them.

Some of my images were funny, some elaborate–some were hard to form, others came easily. Here are a few examples, which mostly illustrate how my whacky mind operates:

As I silently recited these opening words of the Psalm, I often tried to visualize an image of God as a shepherd–and  immediately stumbled. I struggled to imagine him as someone other than Gandalf, as played by Ian McKellen in the Lord of the Rings movies. The only other candidate I repeatedly conjured up was Jesus, in shepherd’s garb. Although Jesus struck me as worthy of the role and this how the Shepherd is construed in at least some denominations of the Christian faith, Jesus just didn’t seem like an ideal fit for me given my Jewish heritage. I also tried out Moses, as depicted in Michelangelo’s iconic sculpture, but for all his greatness, Moses  didn’t strike me as right for the part of a calming shepherd. On a few nights I tried making the Shepherd a tall, fit elderly woman–with flowing grey hair, draped in a long white robe. But she didn’t seem to stick either. So I usually had to content myself with a thin old man with long white hair, looking very much like Gandalf after all.

I had no trouble visualizing  a rich canvas of this verse: a notch-shaped green meadow, sheltered by gentle sloping hills on either side. It was always dusk, and there were other characters, mostly animals, dotting the pasture bathed in soft amber torch light.

Conjuring up a picture to fit this verse, I could see the Shepherd leading me–and sometimes my whole family– across the kind of slow-moving, shallow river I’d waded while fly-fishing.

I went back to the movies again to visualize a scene for this iconic verse, which likely accounts for the 23d Psalm’s central role in modern funeral services. This time it’s The Lion King. Ironically, I see the gorge where Mustafa–who had every reason to fear evil– fell prey to the hyenas, while a frightened Simba clung to a tree branch.

I decided to write about, and thereby,  my private ritual now because of my impression that David’s Psalm has been typecast as a funeral chant, and that the comfort it can provide at other times is underappreciated by many who might benefit from it. I have no problem with the routine recitation of the 23rd Psalm at funerals. In fact, with the exception of one funeral, I’ve always found comfort joining in the recitation. The exception was my dad’s service last year, when the rabbi we’d rented for the occasion raced through the Psalm in a bored monotone, failing to give its beauty the time or tone to emerge and sink in.

My impression that the 23d Psalm has been largely relegated to funerals could well be mistaken. Many people who regularly attend Judeo-Christian religious services at which the Psalm is recited may not associate the Psalm with funerals. And a friend in her mid-60’s recently told me that when she was in elementary school at PS 238 in Brooklyn (also Ruth Bader Ginsburg’s alma mater), the entire student body recited the Psalm at every weekly assembly. Hard to imagine a gathering further from a funeral; I imagine RBG might dissent from my opinion about the Psalm.

I’m not advocating that others should follow my meditative invocation of David’s verses. Others can find their own ways to reap the benefits this remarkable poem has to offer. And some may gain more by adapting a different, perhaps less religious, calming poem to a quasi-meditation practice when having trouble falling asleep or needing a respite in the moments before surgeries or at other anxious times. But for me, despite my lack of attachment to any organized religion, the 23d Psalm has been a valued source of support on a roller coaster ride through a very fortunate life. Indeed, one of my favorite verses of the Psalm is among the last and shortest: “My cup runneth over.”