Lifting The Veil Of Pain 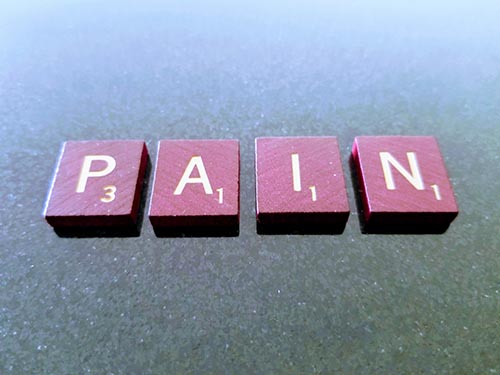 I’ve been thinking a lot about pain recently. Not because I’m in pain, but  because for the first time in years I’m out of it. It was only when the veil was lifted that I recognized and could appreciate how much chronic pain had disrupted and skewed not only my life and, more importantly, how it permeates and overshadows the lives of so many people who are cursed with it.

I led a remarkably pain-free life until about ten years ago, playing various sports, backpacking, and walking the 1½ miles to and from work every day. There were some interruptions–an Achilles tendon rupture surgery (basketball), a minor knee surgery (running and tennis), and other sports ailments. But chronic pain wasn’t part of my life.

The trouble started in 2009 with the emergence of lower back pain that made it impossible to walk for more than a few blocks or stand for more than a few minutes without intense pain running down my leg. It forced me to find something, anything, to sit on in order to get a temporary respite. Physical therapy, back braces, cortisone shots, and acupuncture were futile.

Two operations in January and December of 2012 were also unsuccessful (although the second helped for a while). Ironically, the only relief came when, after a bone marrow transplant in 2013 to cure a blood cancer, I was put on a high dose of prednisone–a steroid and a powerful anti-inflammatory. I told my transplant doctor at Dana Farber: “You know Ted, you may be a lousy cancer doctor, but you fixed my back.” He said: “Don’t get too cozy. When you come off the prednisone the pain will probably return.”

He was right. As the dose was reduced, my pain increased. I walked to work only on rare occasions–and then only by stopping to sit on park benches for a few minutes at three or four places along the way. Walking on the streets, I stopped to sit on fire hydrants every few blocks. Melissa rushed into crowded subway cars to grab a seat for me. And whenever we arrived at airports I sat as Melissa and the kids stood and waited to get our baggage off the carousel. I was their ward.

I wasn’t thinking at the time about all the ways pain had interfered with my life and caused me to devise strategies to cope with and get around it. I was just doing my best to go on with as many of the things I enjoyed as possible. And to all except Melissa–to whom I whined constantly–I was a happy camper. But as I trudged along, I fretted more about my back pain than my cancer. The thing about pain is that it’s hard to compartmentalize. Except for the relatively rare occasions when something triggered a fear that I was going to die from the cancer, I could go about life without constantly thinking or worrying about it. But intense pain is with you constantly. To state the obvious, it hurts. At least for me,the pain was impossible to put out of mind; a constant cloud over my life.

I had another spinal operation in September 2016 after a few more rounds of cortisone shots, physical therapists, and a chiropractor couldn’t help me. It seems to have worked. Although it took the better part of a year, I’m now pain free. As I walked alone through the Upper West Side of Manhattan looking up at apartment Christmas lights one night in December I silently marvelled that I didn’t have to worry about finding a place to sit, or whether I could make it home on foot. I could just enjoy the lights, the walk. I felt like I’d been released from a prison.

Since then, I’ve found myself pausing after doing one unremarkable thing after another that I couldn’t have done without pain (or at all) before: standing on line waiting to get into a movie; talking to a friend on a street corner; standing in a subway car without frantically hoping a seat would open up before the pain became intolerable. I’ve revelled in these small moments, constantly noting them with some amazement to Melissa who’s probably sick by now of hearing about them.

I’m recounting all these personal travails and small triumphs now not to garner sympathy but because it was only when the veil of pain was lifted that I realized, looking back, how many ways pain had altered my life. And, more importantly, I came to recognize and appreciate the burdens borne by the millions of people plagued with chronic pain–those who may never be released from their prisons: the limits pain imposes on their freedom to choose what to do; the extra weight they shoulder as they go to work and take on the daily challenges we all struggle with; and the strategies they must devise to cope with and circumvent their pain.

In contemplating their ordeals from my new perspective, I’ve had two overriding reactions. The first was a feeling of deep respect, as well as empathy. I had a similar awakening years ago when, after an Achilles’ tendon operation, I was in casts and on crutches for several months. Struggling just to get dressed and make it to the office before even starting each day’s work was an educational experience that gave me profound respect for those with serious disabilities who regularly manage to navigate all of life’s challenges that even the luckiest of us bemoan–like running a marathon with 10 pound ankle weights. Now I understand that chronic pain–often invisible–may be among those serious disabilities.

My second reflection was to appreciate how so many millions have fallen prey to the opiates that were foisted upon them by doctors–some unsuspecting, some criminal–as non-addictive cures for their pain. Living in constant agony, it’s amazing that even more chronic pain sufferers haven’t fallen victim to what was a massive and deadly fraud by the pharmaceutical companies that peddled these drugs as harmless panaceas. And now the picture has become further clouded, as honest, diligent doctors are afraid to prescribe appropriate doses of pain medication for suffering patients who need them.

Given my advanced age, I will undoubtedly rejoin the ranks of the pain-ridden at some point, hopefully not too soon. In the meantime, I’m thankful for the respite and, at the risk of being presumptuous, will offer a few thoughts for those who are only now beginning to grapple with chronic pain: