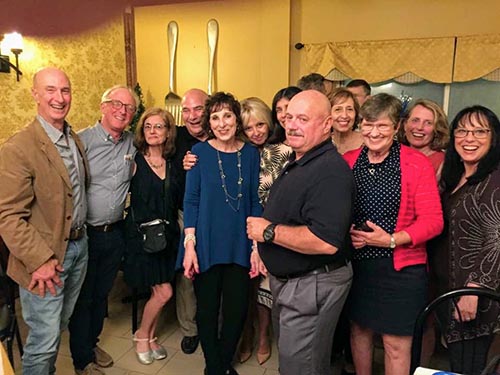 I went to my 47th high school reunion last month. I didn’t know whose idea it was to have a 47th reunion, but in the months leading up to the event it was clear from the social media bustle that survivors of the Dobbs Ferry High School class of 1970–including me–felt a tug to come together in this oddest of years.

Until entering the world of blogging a few years ago while riding a medical roller coaster, I’d lost touch with Dobbs Ferry–the Hudson River village about 20 miles north of Manhattan where I’d gone through the public schools from K-12. My parents moved away; I graduated from college; trudged through law school in St Louis; and was then consumed by a legal career and life raising kids in Manhattan. Over the years, the only tether to my past were the occasional reports of long-ago neighbors and classmates from my younger sister, who remained wired into a Dobbs Ferry network.

After becoming one of the last in America to join Facebook last year, I began hearing from former classmates who’d read my blog posts on the Dobbs Ferry High basketball team and/or my cancer journey. Although I hadn’t thought about many of them for decades, I could visualize each of their teenage faces the moment I saw their names flash on my screen. And as we “talked” on-line, I felt a gravitational pull to reconnect. To renew the relationships that had lain dormant for more than 40 years.

Others were obviously feeling the same urge, as word of our reunion was circulating. I assumed that, as in the past, this would be a multi-class event–that our 47th reunion would be some other class’ more noteworthy 45th or 50th, which would justify our choosing to get together in 2017. But I was wrong. As the date approached I learned this was in fact to be a bona fide 47th reunion–just for us.

Upon hearing that I grew up in Dobbs Ferry people these days often remark that my little town has become a dining mecca to which foodies flock from all over Westchester and the City. This observation surprised me at first given that, growing up, our town’s gastronomic highlights consisted of the lunch counter at Liggets drug store on Cedar Street–where I ate the 90 cent pastrami special on Tuesdays and the meatball subs on Wednesdays (always with a chocolate egg cream);  Jimmy’s southern Italian restaurant–a family treat, where I usually had the $2 eggplant parmesan followed by either spumoni or tortoni; Sam’s and several other pizza places; and Dick’s Cabin, on Main St, to which our family never went because we couldn’t afford it. The big gastronomical development during my eighteen years living in the town was the opening of Charcoal Corner, a trusty burger joint opened sometime in the 60’s which, not surprisingly, has since morphed into the Zagat-rated Sushi Mikes.

But our 47th reunion dinner on Saturday night was held not in Dobbs Ferry but at Rini’s Restaurant and Wine Bar, located 15 minutes up the Saw Mill River parkway in Elmsford, New York. The venue proved to be remarkable for me.

Rini’s is situated in one of several nondescript cinder block buildings in an alley that bordered the piddling Saw Mill River. I was stunned when the Uber driver that brought me from Manhattan (no trains from NYC go to Elmsford) pulled into the alley: I realized at once that the next building in the row had at one time housed West Rock Meats–the butcher shop selling whole sides of beef where I’d worked after school on weekends and vacations during high school and all thru my college vacations (as described in one of my blog posts this spring).

When I walked into Rini’s shortly after the appointed time of 7pm people were already eating dinner, seated at four tables bunched at the end of the narrow restaurant. At first, I recognized no one among the collection of people who naturally, but unexpectedly, looked different at my age than the teenagers I remembered. Still, I knew this gathering must be my reunion because Rini’s was otherwise deserted–and would remain so all night. It was like adjusting to seeing in the dark: It took a few moments until I spotted someone I recognized: Lois–who may have changed the least of us; next came Molly–a fellow cancer survivor who resembled her Facebook picture. As I looked around the room, I deduced who several others must be. I could tell from the murmurs that many in the room had no clue who I was.

I’m sure our evening went much like any other 47th high school reunion–or 50th. Some of us had to reintroduce ourselves. One woman came close and, beaming directly at me, asked: “Do you know who I am?” I looked  hard but had to confess that I didn’t. As soon as she revealed her identity, however, I could see my old friend before me clearly–her eyes and smile were unchanged. And so it went. In each case it was like looking through a telescope and rocketing back in time to see each of my old friends embedded in the “evolved” visages before me. And as I did so, they strained to find the me they’d once known–buried somewhere beneath the bald 65 year-old masked man they beheld.

In another way, too, our reunion was probably typical of others–and emblematic of the migratory patterns of Americans. My classmates travelled from all over to get to our 47th reunion: only 1–a retired New York City Fire Department Captain–still lived in Dobbs Ferry; a few came from nearby towns, including a legendary Dobbs Ferry football coach who restored the town to glory after we’d set the New York State record for the longest losing streak in history (I think it was six years); a doctor from Texas; a musician from Michigan; our former track star now living in Maine; a retired Westchester prosecutor now a fanatical Trojan fan in LA; others hailed from Ohio, Pennsylvania, Massachusetts; only two of us living in New York City.

Dragged and beaten into submission by Molly, we danced up a storm (a rare occurrence for me, as my wife would unhappily attest). Although some of us may have felt like strangers at first, our “new” faces and bodies quickly replaced our outdated childhood images, while our memories of our Dobbs Ferry selves remained vivid. We regaled each other with favorite stories, identifying all the kids in our high school yearbooks–as well as the young children in our kindergarten class picture. The 47 years fell away. There was an air of joy in our corner of Rini’s.

We’d grown up in the village of Dobbs Ferry. We’d shared so much and then fanned out–following different life paths, all over the country . Now, like the salmon I try to catch, some magnetic force had drawn us back from the oceans in which we’d toiled for decades to the small stream from whence we’d come. Shortly before posting this, I learned something important about that magnetic force. I showed a draft of this piece to my friend Lois, who’d been in closer touch with some of our classmates than I had. Here’s what she told me:

“Not sure if you were aware of this, but the motivation for not waiting 3 more years, until the big 5-0, was the fact that we have lost so many classmates….the organizers felt a sense of urgency. Parenthetically, I seem to remember that as early as our 10 year reunion we had already lost 5…out of 120! [In more recent years we’d lost more.] What really provoked the desire to have a reunion this year, and to have it only our class, were two heartbreaking losses within the last year or so….Susan Oleskowitz Winn (who had run many of the prior reunions and was, in my mind, the “glue” of our class) and Irene Stein Lord, who was a sweet, quiet classmate who tragically died at the hands of her husband in a murder/suicide. Many felt the need to be together after these sad losses….”

Time and lives are flying by. If you happen to get an invite to your 47th reunion, I recommend that you make the trip.