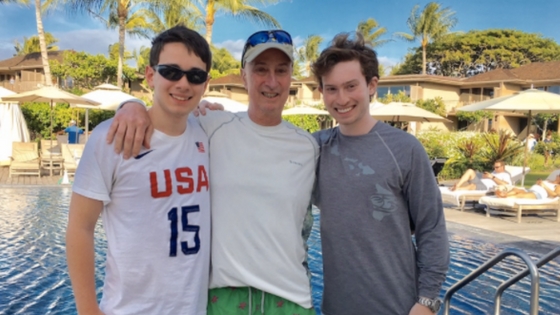 This post originally appeared in the Dana-Farber Cancer Institute Insight Blog on May 11, 2017.

In September 2013, I had a bone marrow transplant that doctors advised was the only potential cure for a blood cancer known as MDS (myelodysplastic syndrome). Although we lived in New York City, we chose to have the transplant done at Dana Farber because we were impressed with everything we saw and everyone we met there—especially Dr. Ted Alyea. I was released from the hospital in October, and Melissa and I settled into our life of quarantine. Almost immediately, I started to worry, and what I worried about most was what I would to do once I emerged from the bubble I was in—barred for around nine months from my office, any public place, and, with few exceptions, people.

I had lots of time on my hands. I knew I couldn’t return to my job—working 50 hour weeks as a law firm litigation partner—anytime soon. Nor could I foresee the day when I’d be in shape to play tennis or go fishing with friends. But silver linings started to appear quickly, and although it’s taken a few years, a new, bright picture has taken shape.

Perhaps the first of those silver linings was that I’ve been able to read more in the last 3 1/2 years than in my entire adult life. (I’ve written about some of my favorites on my blog.) A second bright spot was the apartment’s piano. Several weeks after being discharged, I was lucky to find Rebecca, a terrific jazz pianist who came to the apartment wearing a mask and gloves to teach me. The lessons were great until she got sick and my doctor wouldn’t let her near me. So we continued them by Skype. The lessons—and my very slow progress—continue to this day. I have time to practice daily—an impossibility in my old life.

Despite the books and piano, I spent a lot of time worrying, obsessing, about what I would do professionally once I could work at least part time. Although I’d enjoyed my career as a corporate litigator, it wasn’t the career I’d anticipated when I went to law school 40 years ago to be a public interest lawyer. Cancer forced me to think hard about what I wanted to accomplish—and what I wanted to experience and enjoy—during my lifetime, which now had a much shorter horizon. I began to focus on how I could reshape my career once I could get back to working.

There have been bumps and detours along the way. But after a few years of internal turmoil, burdening Melissa with my consternation, and chasing dead ends, things seem to have fallen into place. I’ve decided to devote my professional time to public service work helping people in need: disadvantaged children, victims of domestic violence and human trafficking, and prisoners who should no longer be incarcerated and those attempting to make a fresh start after release. I’m also spending time on things I rarely had time for in my pre-cancer life—fly fishing (not catching), traveling, taking courses, seeing plays with Melissa, continuing my slow progress on the piano, and now writing. While I certainly wouldn’t have wished for cancer, I’m happy with my “new life,” and don’t pine for the old one.

My other source of worry was the sorry state of my body. Although I’d been active before I became ill, every ounce of strength seemed to have been sapped by the pre-transplant intensive chemo I’d undergone. Later, the prednisone steroid I took, while life-saving, severely weakened my muscles. I struggled to walk up stairs, and even after I could return to the tennis court I had no strength to run for balls, no stamina. I felt like a decrepit old man.

In the face of these frustrations, I just tried to keep moving ahead to regain strength—even when the most I could do was very little and progress was elusive. There were months when exercising served only to remind me of my feebleness. And there were times when I pushed myself too far and suffered the consequences. But that was just a part of the back-and-forth process for me. It’s only been in the past several months that I’ve felt strength returning. I can exercise more frequently and I’ve made some (albeit unimpressive) progress on the tennis court. But even now, my strength still seems to come and go, and I know there will continue to be ups and downs—physically and emotionally.

The three overarching lessons I’ve learned from this experience are: