Cry Of The Lambs 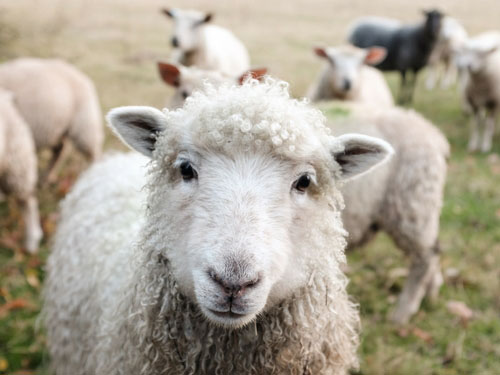 As we travelled around Scotland last spring, the sheep dotting the lush green hills and fields were an ever-present feature of the country’s serene canvass. It wasn’t until midway through our two-week trip—from Edinburgh through the Highlands, to the Isle of Skye and then north to the Orkney Islands—that Angus opened my eyes to the dark reality of those tranquil pastures.

He drove a taxi on the Isle of Skye. Our innkeeper asked if he would show us around for a few hours after Melissa, our son Harris and I had arrived with no plan for what to do, only to learn that there were no available rental cars or tour guides. Probably in his 50s, Angus was about 5’8″ and mildly stout, still with a full head of dirty blond hair. Not a tour guide, he initially didn’t volunteer a lot of information, but was happy to answer questions in his quiet Scottish brogue. We asked a lot of them—many about Skye, and even more about Angus himself. His answers flowed more expansively as we rode along. We ended up spending two days with him.

Angus told us he drove the taxi part-time, having retired after working for decades as a supervisor of the fuel delivery trucks serving the Isle, which accounted for his extensive knowledge of Skye, with its dramatic, jagged coastline and sheep-covered mountains. But most interesting was Angus’ disclosure that he was also (and is still) a sheep farmer. We spent much of our remaining time grilling him and receiving the tutorial that flowed on the logistics and economics of Scottish sheep farming.

It’s an elaborate communal affair, deeply embedded in Scottish culture and law. Along with several other families, Angus owned shares in a “croft” of land used to farm the sheep. Each of the croft’s member families had passed down their shares for generations.

According to the Scottish Crofting Federation, crofting is a “unique social system” dating back 200 years by which small scale food production is conducted in Scotland on rugged terrain, virtually all of which is classified as “Severely Disadvantaged.” Crofting families represent over 65% of the households on Skye, and 35% of those throughout the Highlands. Although the crofters rent and don’t actually own the land, laws ensure their right to farm the land in perpetuity. Because the returns are usually insufficient to live on, most crofters, like Angus, also have other occupations.

I asked Angus about the wool: How and when are the sheep sheared? Who do you sell it to and what do they do with it? The answer was initially stunning: Angus told us that the wool—our tender association with sheep—had become a largely irrelevant vestige of the past.

When I thought about our contemporary clothing, Angus’ answer made sense. My Sheepskin fleece coat—impenetrably warm, but heavy and cumbersome—has been buried in the corner of our closet for decades. In the meantime, I’ve donned coats, vests, and sweaters made of Polarguard, Primaloft, Thermolite, and numerous other brands of synthetic fleece or fill—warmer and  lighter than wool. Angus and his fellow sheep farmers are victims of the technological advances we enjoy.

So my next question for Angus: then what are you and the other Scottish sheep farmers doing with these millions of sheep? His answer, again in his gentle brogue but now translated into my words: the sheep are merely lamb factories. They exist solely to generate their children for human consumption.

And these modern “factories” are brutally efficient. Angus explained that every winter a man with an ultrasound scanner arrives from New Zealand and travels throughout Scotland screening sheep to determine which are pregnant, which are carrying twins (farmers use various means to stimulate twins), and which are barren. The “empties” are deemed useless—and quickly disposed of.

Believing that most Americans were as ignorant of the cold reality of sheep farming as I was, I’d planned to write about all this when we got back from Scotland last June. Not surprisingly, I procrastinated—but the disturbing image of the Scottish lamb factories came back to me from time to time. Then, around Christmas I came to the final chapters of Yuval Noah Harari’s Sapiens.

A remarkable history of the human race, Sapiens canvasses the latest science pertaining to the many subjects it covers—including modern food production. Harari’s discussion of humans’ treatment of animals alarmed me.  It concludes:

“If we accept a mere tenth of what animal-rights activists are claiming, then modern industrial agriculture may well be the greatest crime in history.”

Sapiens reignited the guilt in me that our talks with Angus had kindled. Reading it spurred me to consider giving up meat—something I’d thought I should do from time to time in the past. Unfortunately, I really like meat. I eat, cook, and often enjoy fish, but given the choice between a rib steak and a salmon steak, I’ll almost always choose the former. And, while I like vegetables, I never order a vegetarian entree in a restaurant.

I pondered various alternatives: I could try to give up meat completely, but doubted I’d stick with it, especially because I don’t feel a moral compulsion to shun the traditional notion of the natural food chain. I thought about avoiding all but “humanely-raised” meat, but initially worried that would just be an isolated elitist feel-good ploy that most Americans couldn’t afford, and that it would do nothing to discourage the massive crimes being perpetrated against animals. So I considered other compromises that I hoped would accommodate both my craving for meat and my moral misgivings: eating meat once a week; only on special occasions, etc. None were ideal. And more importantly, my anxiety over the sheep caused me to reflect on the ways in which I roll through a cushy life disregarding other lingering concerns over things I’ve done, not done, or not done enough.

I often say that I don’t harbor many regrets about things I’ve done, or not done, in the past—most of which I can’t do anything about. But perhaps I have more regrets than I choose to admit—especially as to those things I still can do something about; like eating factory manufactured meat. I just conveniently bury and ignore them until I step on a mine like Sapiens that rekindles my guilt.

Before posting what had shaped up as a depressing story triggered by one fragment of a trip that had in every other respect been exhilarating, I decided to do a little research: First, on the treatment of Scottish lambs after they leave Angus’ croft and before we eat them. The picture, which had started my ball of consternation rolling, wasn’t pristine but looked markedly better than that for the mass production of meat in the U.S.; Scottish regulations and industry standards require humane treatment of their lambs.

Second, I remembered a recent New York Times article about how to buy organically grown beef straight from the ranch (Grass-Fed Beef Sold One Cow at a Time). Following the trail, I found numerous sites that unveiled a burgeoning industry—like so many others, facilitated by the internet—by which Americans are flocking to buy humanely grown meat. And one of those sites was for a butcher shop that had just opened in walking distance of our apartment. I went in and ordered two rib and one strip steak. My son Tommy said they were the best steaks he’d ever had. Finally, shopping in Whole Foods in Maine the other day I learned that their stores have been selling meat from humanely grown animals to millions of better-informed Americans for years.

In fact, the more I’ve delved into this the clearer it’s become that I’ve been oblivious to what has been a significant trend. As a recent MarketWatch piece reported, in a 2014 Consumer Reports survey 80% of those responding considered better living conditions for animals to be “important or very important,” and 67% percent were willing to pay more for humanely raised chicken. And contrary to my initial skepticism, this does seem to be an instance where well-meaning individuals “voting with their dollars” have driven real change. MarketWatch also reported, for example, that Perdue had announced an “overhaul of its animal welfare practices.”

So I may have belatedly gotten lucky—at least as far as addressing my concerns about meat goes. Now what to do about my other nagging concerns, some subsurface but a few tormenting me daily. Like the fact that while I constantly fret and rant about Trump, I haven’t yet done enough to support the resistance to the greatest internal threat to our country in my lifetime.