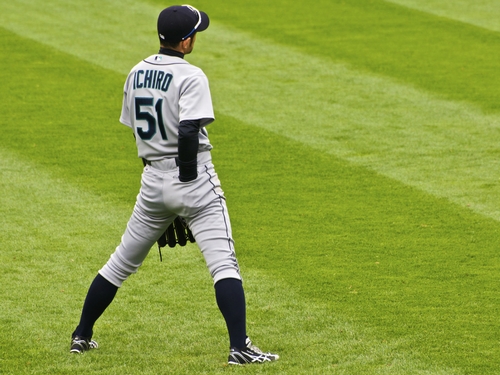 Repeatedly proclaiming his disbelief that a 42-year-old could make such an acrobatic catch, Howie evinced no disappointment at the Mets’ loss of the sorely-needed two runs.

Meanwhile, back at the ranch, my reaction to his foaming over Ichiro’s feat was to think about me:

If Ichiro was an octogenarian, where did that leave me, 22 years his senior?

A bitter-sweet feeling – probably common to many boomers – has often swept through me as I’ve witnessed the ever growing parade of great athletes pass from cradle to retirement.

Watching these stars from the beginnings through the ends of their careers, and listening to broadcasters like Howie Rose tell us that 35, much less Ichiro’s 42, is “old,” are just a few of life’s incessant reminders that at 64, I’m in the final act.

But at the same time, one of life’s genuine pleasures these days is to reminisce with friends and proudly exchange memories of these same athletes’ exploits. We each have our favorites, often depending on our age and who we rooted for.

On balance, I’ll take these sweet memories despite the sobering reminders they bring, which are just water over the bridge anyway.

And for those looking for some signal that there’s life after 60 (or 70), they need only shift their sights to the musicians who never seem to go away, or who re-appear after decades.

I read an article in the New York Times recently about the much-anticipated Desert Trip Festival in Indio, California – a two-weekend “classic rock” festival I’ve also seen described somewhere as a “Concert for the Ages (and the Aged).” The line-up included The Rolling Stones, Dylan, McCartney, Neil Young, Roger Water and The Who.

The average age of the performers at Desert Trip was 72 – easily old enough to be Ichiro’s father! Affluent boomers flocked to buy tickets and attendance was expected to be in the range of 75,000 per night.

A friend in his early 50’s told me the other day that the vitality of Mick Jagger and these other icons gives him hope that he can still be chugging along when he’s 70. I replied that when I watch Springsteen perform or the 70 year-old Bette Midler bound across the stage for hours it just reminds me of how far I’ve fallen.

Here again, each of us will marvel at our own favorite icons, and react differently as we reflect on our own lives – encouraged or depressed?

While I repeatedly bore my 20 year-old son Tommy with my own exclamations of amazement at Ichiro’s longevity, he raves about the Springsteen concert he recently went to. I consider heading for the desert.